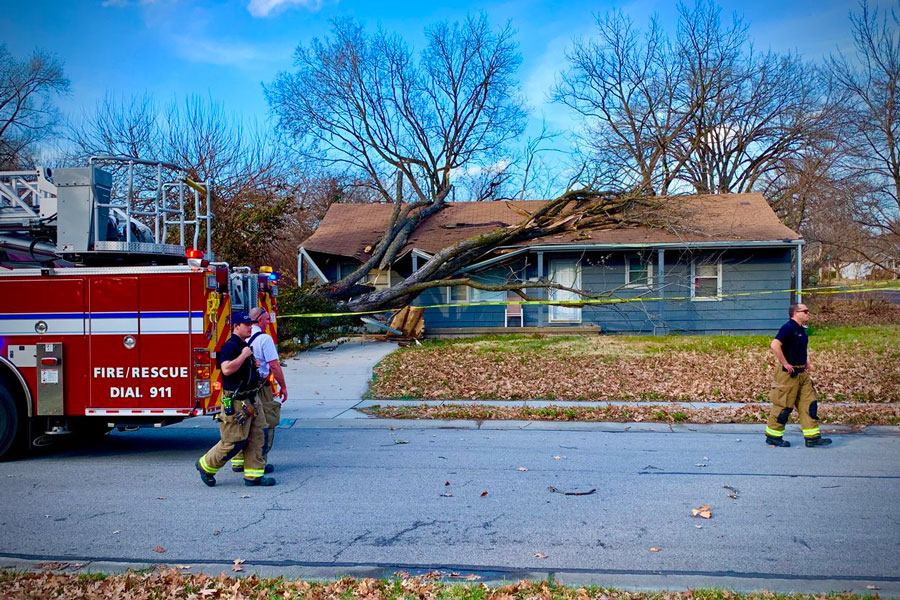 Chuck Caisley, Evergy’s chief customer officer, said in a Wednesday night press release that the heavy winds and thunderstorms resulted in “one of the highest, if not the highest outage event” ever for the utility.

The company reported some 200,000 customers in Kansas and Missouri without power at the storm’s peak, Caisley said.

At about 7:30 Wednesday night, Evergy’s outage map reported more than 13,000 customers in Johnson County without power. Two hours later, that number was down to less than 7,000.

Caisley said Evergy prepared for the storm by upgrading its website to ensure the outage map could handle additional capacity. More than 1,100 Evergy employees — from lineman to customer service personnel — were working toward storm restoration, he said.

Evergy called in reinforcements from utility companies in Texas, Colorado, Arkansas and Oklahoma, Caisley said. Still, he said it would be “impossible” to restore all customers in 24 hours.

A rare December system of severe thunderstorms rolled through the Kansas City metro Wednesday evening, packing 70 mile per hour winds and large hail in some areas of Johnson County.

Brent Pesel, a meteorologist at the National Weather Service’s Kansas City field office, said December storms that impact this much of the country are usually snow storms in the north. Sometimes, Pesel said, there are less significant thunderstorms and tornadoes to the south.

“This is certainly an anomalous event compared to what we would normally think of for December weather,” Pesel said.

Johnson County and much of the rest of the Kansas City metro remains under a high wind warning until midnight tonight.

Wednesday began with gusts of winds reaching 40 miles per hour in the afternoon, according to the National Weather Service’s  Kansas City field office.

The office warned at that time that storms could result in 70 miles per hour winds and hail the size of ping pong balls, according to a tweet.

Tomorrow, Pesel said people should “be aware of their surroundings” — especially when picking up limbs or other items the storms and heavy winds may have blown around.

As of  7:30 p.m. Wednesday night, more than 13,000 Johnson Countians were without power, according to Evergy’s power outage map, roughly 4% of customers served in the county.

Across Kansas and Missouri, more than 4,700 outages had left nearly 175,000 Evergy customers without power Wednesday evening.

The utility was set to hold a virtual press conference later Wednesday night to give an update on the situation.

Some of Evergy’s crews were already responding to power outages caused by the heavy winds earlier in the day, according to a press release.

At that time, “outages were limited and scattered,” according to Evergy.

The heavy winds also caused one Lenexan’s fence to collapse.

This included a power line and tree down in the 6100 block of Hadley, according to a Merriam Police Department tweet.

If you can help it, avoid driving or even being outside until this storm passes. pic.twitter.com/sxK9IIHhfe

A tree fell onto a residential street in Old Town Lenexa, according to a Lenexa Police Department tweet. The department encouraged the public to stay inside.

If you can help it, avoid driving or even being outside until this storm passes. pic.twitter.com/sxK9IIHhfe

In Shawnee, a tree fell into a garage near W. 73rd Terrace and Switzer Road, 41 Action News reported.

Tree into a garage on W. 73rd Terrace and Switzer street in @CityofShawneeKS @KSHB41 pic.twitter.com/NBo17mI71k

By 6:25 p.m., Johnson County Emergency Management tweeted all severe thunderstorm warnings for the county were allowed to expire.

All Severe Thunderstorm Warnings in Johnson County have been allowed to expire.