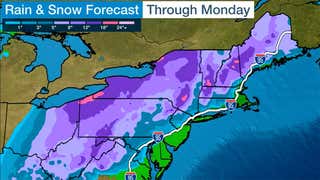 Parts of major interstates were shut down, hundreds of thousands of people were without electricity and thousands of flights were delayed or canceled at major airports across the South as a winter storm barreled through Sunday on a path to the Northeast.

Here’s a look at the storm’s impacts on Sunday:

The roof of a residence hall collapsed at Brevard College Sunday afternoon in Transylvania County, North Carolina, about 17 miles southwest of Hendersonville.

The college later confirmed that nobody was hurt in the incident.

I-81 northbound was shut down in Roanoke County due to at least two crashes, according to state police. As of 3:25 p.m. EST, traffic was backed up about 3 miles and was being detoured off the highway.

Another crash in Montgomery County resulted in a minor injury.

Virginia state troopers responded to 142 traffic crashes and 162 disabled vehicles from midnight to 12:45 p.m. Sunday, according to The Associated Press. No fatalities were reported.

“If you’re east of I-71 please plan ahead and avoid travel during the storm,” the state Department of Transportation said in a tweet early Sunday morning. “We will be out in full force, but with snow this heavy it will accumulate on the roads. Travel will be hazardous.”

Some areas in the southern and eastern parts of the state were expected to see heavy snow Sunday into Monday, according to the latest forecast.

Portion of I-40 Closed in Western Tennessee

A section of eastbound Interstate 40 closed at mile marker 136 in Humphreys County due to an overturned semi. As of 1:45 p.m. CST, one lane was open, according to a tweet from state Department of Transportation spokesperson Rebekah Hammonds.

At least four routes shut down due to high winds and other conditions, according to the state Department of Transportation. They are: Southport to Fort Fisher, Cedar Island to Ocracoke, Swan Quarter to Ocracoke and Currituck to Knotts Island.

Impacted roads include interstates north and south of I-80, portions of the Pennsylvania Turnpike and parts of I-80.

The level of restrictions and timing varies. Drivers should check the Pennsylvania Department of Transportation’s social media pages as well as 511PA.

A portion of the road in Robeson County, North Carolina reopened after being closed for several hours due to low-hanging power lines.

Personnel pulled stuck vehicles including buses, semitrailers and cars on Interstate 85. In all, about 120 National Guard members were mobilized for winter storm response as of Sunday afternoon.

Florida, where Izzy’s warm side spawned tornadoes, was reporting about 29,000 outages.

“As of this morning we have responded to 460 calls for service and 200 collisions in affected areas and those numbers continue to grow,” North Carolina Highway Patrol Col. Freddy Johnson said in a noon news conference with the governor.

“And we know this is just the beginning.”

Johnson asked drivers to refrain from calling 911 or the highway patrol unless they have a true emergency.

Up to a Foot of Snow in Parts of the South, Flurries in Florida

-Up to 12 inches of snow had already fallen in parts of western North Carolina.

-In the Greenville-Spartanburg, South Carolina, metro, up to 4 to 6 inches of snow was reported Sunday morning, with snow falling at the rate of about 1 inch per hour, according to The Weather Channel meteorologist Mike Seidel. This makes it their heaviest snowstorm in almost eight years.

-Up to 9 inches of snow was reported in Rankin County, Mississippi, just northeast of Jackson.

-At least flurries have fallen as far south as McComb, Mississippi, near the border with Louisiana.

-Some flurries even flew in parts of the western Florida Panhandle Sunday, north of Pensacola.

Click here for the latest on Izzy’s snowfall, ice accumulation and forecast from weather.com meteorologists.

The tornadoes caused damage across the Fort Myers metro area, the Lee County Sheriff’s office confirmed, and injured at least one person.

Portion of I-95 Closed

Interstate was is closed in both directions near mile marker 30 in Robeson County, North Carolina, due to downed power lines. The highway shut down around 9:30 a.m.

“We’re really starting to see those two hazards – snow and ice,” she said.

Several cities have opened places for people to keep warm.

In Nashville, Metro Social Services is running an extreme cold weather shelter through 7 a.m. Monday at 3230 Brick Church Pike. It’s open to anyone, including those with pets.

In Charlotte, a warming center is open at the Hal Marshall Service Center, 700 N. Tryon Street. It’s scheduled to be open until noon on Wednesday. There are no beds or overnight accommodations, but shelters are open at other locations.

Those in need of a warm place to go should check with their local emergency management agency or social services.

Hundreds of Thousands Expected to Lose Power in Carolinas

Duke Energy estimates that as many as 750,000 customers in North Carolina and South Carolina could be without electricity as Winter Storm Izzy moves through, and the company warns those outages could last for multiple days.

Some 10,000 workers were staged to respond, including crews from Texas, Oklahoma, Florida, Kentucky, Ohio and Indiana.

Drivers in North Carolina were told to stay home as roads across the state were covered in snow and ice.

Motorists should check DriveNC for the latest conditions.

More Than 1.5 Million Gallons of Brine Spread on Georgia Roads

More than 600 employees worked Saturday night into Sunday treating interstates and state routes, according to the Georgia Department of Transportation. More than 1.5 million gallons of brine and 2,600 tons of salt have been spread. Another 80,000 gallons of brine were set to go out.

Officials warned that operations could pause depending on weather conditions.

“Winds gusting to as much as 50mph continue to remain a threat to emergency workers and the public,” a Sunday morning update said. “Georgia DOT emergency crews will be closely monitoring the wind conditions for impacts to trees and power lines and urges the public to stay off the roads – for motorists’ own safety as well as that of first responders and essential work crews. Extremely high winds can be so dangerous to worker and public safety that certain operations may pause until safe conditions resume.”

Power Outages Mounting in the South

Some 250,000 homes and businesses were without power across the South Sunday morning, according to poweroutage.us. Georgia led the way with more than 100,000 outages, while South Carolina had more than 50,000 customers in the dark. On the warm side of the system, more than 38,000 Florida homes and businesses lacked power due to stormy weather.

More than 2,500 flights into and out of United States hubs were canceled Sunday morning, according to FlightAware. More than half of those cancellations were out of Charlotte and Atlanta.

American, Delta, Southwest, JetBlue and Spirit airlines all issued travel advisories and waived change fees at those and dozens of other airports in Izzy’s path.

The Weather Company’s primary journalistic mission is to report on breaking weather news, the environment and the importance of science to our lives. This story does not necessarily represent the position of our parent company, IBM.